No Rehabilitation Medicine specialist (Physiatrist) HoD in PGI Chandigarh since 2009


If you have suffered from a stroke and need proper rehabilitation, PGI is not your place of care, as there is no physical medicine and medical rehabilitation specialist (PMR)­ HoD physiatrist since 2009. There is an orthopaedician instead. What kind of wheelchair or braces is required can only be recommended by a physiatrist, say experts.

PGI is not only disabled-unfriendly institute, the rehabilitation services for the disabled has been compromised with new recruitment rules which were accepted in 2016. “There are few physiatrists with requisite experience required all over the country . I had applied for the post of the professor and despite the fact that there was no other such specialists who had over 14 years of experience as I had, the post was left vacant,“ said professor V S Gogia, Dr Ram Manohar Lohia Institute of Medical Sciences, Lucknow.

As per the MCI and the UPSC rules (a copy of which is with the TOI), which the AIIMS follows, priority is given to a physiatrist with an experience of 14 years. However, if the specialist is not available, MD in surgery , orthopaedics or medicine may apply with same years of experience in PMR. The PGI's new advertisement has relaxed six years for non PMR, while for a qualified PMR, the experience remains 14 years for the post of professor.

Recently , a health activist based in New Delhi, Dr Satendra Singh, had been invited by the Ministry of health and family welfare (GNCTD) after he proposed setting up of a department of physical medicine and medical rehabilitation in all government colleges in Delhi. “The institute in its advertisement has equated physiotherapist with a PMR. The recruitment rules have been reshaped, which is against MCI norms and smacks of vested interests,“ said Dr Satendra. However, PGI officiating director Dr Subash Varma said, “These recruitment rules have been changed before I occupied this post. Even AIIMS has the same rules as we have."

Following my Facebook post where I wrote an open letter to Health Minister on the neglect of Rehabilitation services in the PGI Chandigarh, TOI Chandigarh carried the above story and also highlighted how there advertisement equated paramedical physiotherapists with MD/DNB Physiatrists. Full letter is reproduced below:

Sir,
Rehabilitation is a process aimed at enabling persons with disabilities to attain and maintain optimal, physical, sensory, intellectual, psychological environmental or social function levels. At the outset, I declare that I have no conflict of interest. I am a MD Physiology and have no relation to Physical Medicine & Rehabilitation (PMR) or Orthopedic specialty. However, as a doctor with disability and a disability rights activist, I have petitioned State Commissioner (Disabilities), to direct Health Department of the Govt of the Delhi to instruct Medical Directors of the three hospitals under them to set up PMR department at the earliest. I have also written to Medical Council of India (MCI) to start Disability Medicine in medical curriculum and petitioned National Human Rights Commission on the accessibility of medical institutions in the Country.

In March 2009, then Professor & Head of the Department repatriated back to his parent Institute (All India Institute of Medical Sciences, Delhi). The Department of PMR at PGIMER has been under part-time, care-taker Head of the department since April 2009. The incumbent part-time, care-taker head of the Department is neither a PMR specialist nor has any previous PMR experience. The department therefore is without full time PMR Specialist HoD since April 2009 and has reduced to just a glorified physiotherapy service only. Even Neurology dept at PGI has been referring patients to PMR Dept of CMC Ludhiana.

The Court of Chief Commissioner for Persons with Disabilities has earlier instructed MCI vide CCPD No.9-3/CCD/2007 dated 15 May 2008 that “doctors not trained on rehabilitation should restrict their treatment of children with disabilities to their medical illness/disease or else action be initiated against such practices under relevant section of MCI.”

The interviews were held for the post of Professor of PMR in 2015 and 2016 but the only candidate having the required PMR qualification and requisite experience was not selected. Moreover, the faculty recruitment rules were changed during the recruitment process last August, as the post was withdrawn (06 October 2016) and re-advertised (07 October 2016) incorporating arbitrary and illogical eligibility criteria against MCI norms for non-PMR specialists.

In the new recruitment rules, for faculty in PMR, MS (Orthopedics) was also added as one of the eligibility qualifications. The experience criteria for MS (Ortho) candidates were also relaxed. A PMR Specialist needs to have 14, 10, 6 and 3 years of experience for the posts of Professor, Additional Professor, Associate Professor and Assistant Professor in PMR respectively, while a non-PMR Specialist (read MS Orthopedics) candidate needs only 8, 5, 3 and 2 years of experience in PMR out of 14, 10, 6 and 3 years for the same posts.

With the passage of the new Disability Act, it has become all the more important that strong PMR Dept be there to cater to the obligations of the state as provided under the RPWD Act 2016 and Article 25,26 of the UNCRPD. It is therefore requested to revive the rehab services at PGI Chandigarh by:
a) Appointing a full time PMR Specialist as Professor and Head of the Department; and
If at all the PMR faculty recruitment rules are to be revisited and modified, the inputs should be from PMR Specialists in other National Institutes (AIIMS/JIPMER/NIMHANS)/medical colleges with PMR teaching departments, and Doctors with Disabilities.

Web Accessibility workshop at the Election Commission of India

We conducted a Web Accessibility workshop at the Election Commission of India on 1 February 2017. I took the inaugural session then Prashant Ranjan Verma (National Association for the Blind) and Amit Verma helped participants with hands on session on laptops. Disability Rights Alliance was involved in this too. We are happy to get opportunity to visit this organisation which is among the few respected by all.

After the workshop participants from different states admitted that they were not aware of the barriers their websites had for person with disabilities and now they will try to comply with The web content accessibility guidelines WCAG.

'The Wire' has published a detailed article on our endeavours as how disability activists and EC worked to make assembly polls more accessible. It also highlights the pioneering work down by DM Azamgarh Suhash LY and his wife Additional DM Ritu Suhas in making elections disabled friendly.

Special mobile apps, software, infrastructure, training for personnel and feedback mechanisms have been created to make voting easier for persons with disabilities.

Read the full article at this link.

Posted by Dr Satendra Singh at 10:32 AM No comments:

Workshop on simplification of forms while availing excise rebate

After a lengthy advocacy with Dept of Heavy Industries (DHI), Centre quashed manufacturer's certificate required to avail excise duty concession on the purchase of a new car by a person with disability. This was largely because of my face off with high-headed and insensitive Maruti Suzuki India Limited (MSIL). Still, few problems remained in the medical certificate. 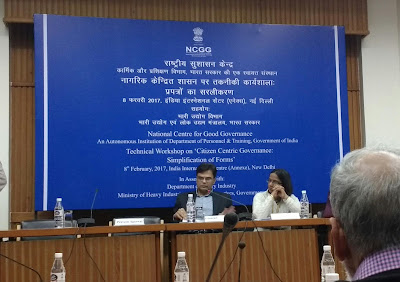 National Centre for Good Governance (NCGG), an autonomous institute under DoPT, along with DHI organised a technical workshop on 'Citizen Centric Governance: Simplification of Forms' today at India International Centre where I was invited too along with stakeholders from auto industries and people who 'faced the music' while availing such concession. Hats off to DHI for revising the 16-question proforma to a single page. Feedback was sough on this revised format. 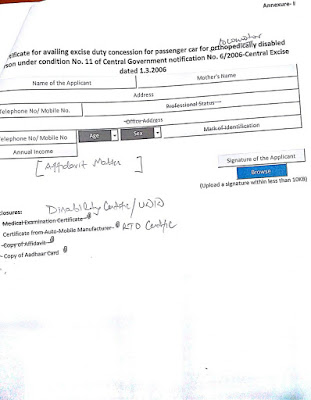 I suggested removal of medical examination certificate in entirety and replace it with either Disability Certificate OR MSJE's Unique Disability ID (UDID). Director General of NCGG Dr Gyanendra Badgaiyan was very receptive. Few participant raised the issue of multiple format by hospitals to which I highlighted 'Persons with Disabilities Amendment Rules 2009’. Based on stakeholder response from disability sector, RTO certificate was preferred over manufacturer. The affidavit wont be needed as the same info can be used in the online form just above signature. UDID will also make copy of Aadhar card irrelevant.

DG NCGG was especially irked by 'invalid carriage' and I proposed to use the term 'Adapted/Altered Vehicle driven by a person with disability'. He said he will personally take up the issues with Secretaries. Knowing his past contribution in bureaucracy, I am hopeful. Revision of forms will help those PwD also who can use manual transmission. Unlike the PMR deptt of Safdarjug Hospital, now PwDs wont be asked to get mental certificate on 'state of mental health' (Yes, they have actually mentioned this in writing)

Hats off to DHI and Director Praveen Aggarwal and Under Secy Ajai Gaur for hearing me patiently and putting things into action over the past one year. This is not their job still they are doing it. Sadly, I dont have such nice words for nodal Ministry (MSJE or Deptt of Empowerment of PwD)
Posted by Dr Satendra Singh at 10:12 AM No comments: