I was invited as Chief guest & Nipun Malhotra as guest of honour at St Stephen's annual fest ‪Utkarsh16‬ organised by their Enabling Unit. Surprisingly the College Hall has big steps & there was no way we could have reached on the stage.

Either way, we were not going to even try that. The newly appointed Principal saw that & immediately came down.

The whole function kick-started at the same level thereafter.

The three of us gave prizes to all the students with disabilities.

This is what I call true inclusion!

Mr Verghese also added that, "I want a ramp not only for namesake but want it so that these students can come on this stage and collect awards.

The College hall erupted in joy!

Compare this with the fad happening at Vigyan Bhawan where National Awards are given in the presence of President and prominent disability leaders.

No body considers their dignity and the sham continues year after year. What we need is Chief Guests/ Guest of honours with disabilities and not insensitive politicians. 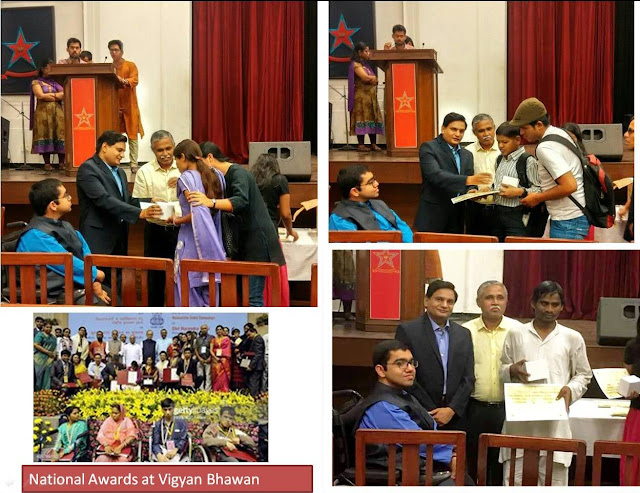 The icing on the cake would be visionaries like Mr John Verghese!

Posted by Dr Satendra Singh at 12:27 PM No comments: