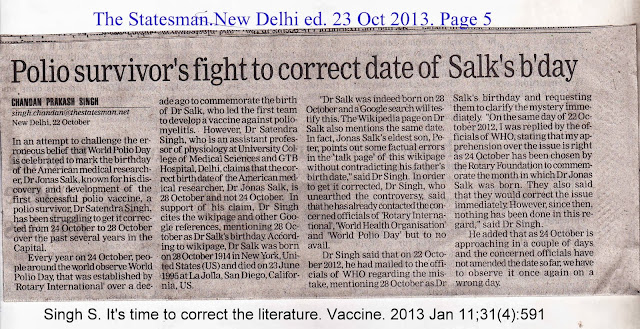 The WHO site this year still states 24th Oct as World Polio Day.  'Vaccine,' the official journal of the Edward Jenner Society, The International Society for Vaccines & the Japanese Society for Vaccinology, published my letter to the editor [Singh S. It's time to correct the literature. Vaccine. 2013 Jan 11;31(4):591.  doi: 10.1016/j.vaccine.2012.11.059. Epub 2012 Dec 4. PubMed PMID: 23219693.] contradicting the same. Still, we are continuing with a wrong trend and not giving right credit to the right man. Please find above, my story in today's Statesman (Delhi Edition).


Enablist Impact: From blog to a prestigious journal

Posted by Dr Satendra Singh at 7:26 PM No comments:

Delhi Metro: Not so friendly for the disabled 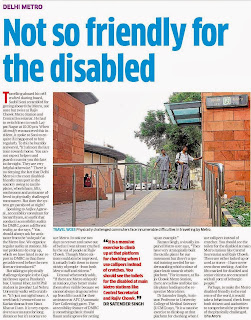 Travelling aboard his self-crafted skating board, Sushil Soni scrambled for getting aboard the Metro, not once but twice at Rajiv Chowk Metro Station and Central Secretariat. He had to switch lines to reach Lajpat Nagar at 10:30 pm. When Metrolife encountered this incident, it spoke to Soni to enquire if it happened to him regularly. To this he humbly answered, “It’s almost the last train towards home. You cannot expect helpers and guards to assist you this late in the night. They are very helpful otherwise.”  There is no denying the fact that Delhi Metro is the most disabled-friendly transport in the country owing to tactile-plates, wheelchairs, lifts, washrooms and assistance offered to physically challenged commuters. But does the system get paralysed at night?Speaking to Anjlee Agarwal , accessibility consultant for Samarthyam, an outfit that conducts accessibility audits for DMRC, poses a different reality, as she says, “ You should always ask for assistance from the ‘sahayaks’ at the Metro line. We organise regular audits at stations. Minor problems do crop up, which we have listed in our report to DMRC so that these get addressed before the new lines are introduced.”
But talking to physically challenged people in the Capital throws open a Pandora’s box. Ummul Kher, an M Phil student in Jawahar Lal Nehru University walks with crutches. “It’s just not night hours. A week back I ventured out to Karkardooma from Hauz Khas at 11 am. It is very expensive to use an auto for long distances but it’s a torture to use Metro. It took me two days to recover and move out of bed as I was almost crushed by the sea of people at Rajiv Chowk. Though Metro stations could also be improved, it actually boils down to insensitivity of people - from both Metro staff and citizens.”
Ummul vehemently adds, “If there are Metro sahayaks at stations, they better make themselves visible because we cannot always drag ourselves up from lifts to ask for their assistance at AFC (Automatic Fare Collecting) gates. The accessibility feature of DMRC is something that it should flaunt and improve for setting up an example.” Raman Singh, a visually impaired Metro-user says, “They have very strategically built the tactile plates for our movement but there’s a special training needed for understanding which colour of plate leads towards which platform.” For instance, at Rajiv Chowk Metro Station, there are yellow and blue tactile plates leading to the respective Metro lines.Dr Satendra Singh, Assistant Professor in University College of Medical Sciences (UCMS) says, “It is a massive exercise to climb up at that platform for checking when I use callipers instead of crutches. You should see the toilets for the disabled at main Metro stations like Central Secretariat and Rajiv Chowk. These are either locked up or used as stores – I have never seen them working. And the lifts marked for disabled and senior citizens are crammed with all sorts of lethargic people.” Perhaps, to make the Metro disabled-friendly in the real sense of the word, it would take a behavioural check from both citizens and authorities to comprehend the problems of the physically challenged.

Posted by Dr Satendra Singh at 6:03 PM No comments: