Less last-mile pain for disabled,but some not so lucky
Times of India, 11 April 2014

"Dr Satendra Singh,who highlighted the lack of accessible polling booths earlier,said that he is satisfied with the arrangements this time.He credited the election office and NGOs for the improvement. Disability rights activist Javed Abidi welcomed the change.I was in a car.When the cops saw I am a wheelchair user,they allowed us to drive in till the booth.One of our staff members whose polling booth was in a community banquet hall said the place has a permanent ramp. Every election,I was forced to leave my wheelchair and walk up to the booth on crutches.The election commission made excellent arrangements this time, said Mohammed Riyaz Khan,a resident of Jawahar Mohalla."

Read the full story here on TOI website.
Posted by Dr Satendra Singh at 9:39 AM No comments:

Being a citizen of India and a person with disability, I strongly condemn the views expressed by BJP presidential candidate Shri Narendra Modi at Jamshedpur today on 10 April, 2014.

The PTI reports that Mr Modi said at the election rally that "the country does not want a deaf and dumb, handicapped government, run by remote control, at the Centre. The country wants a 'sevak' (worker) to lead it to new heights,"

The text of the report appearing in the Pioneer is available at the following link here:

If the reported remarks are true it reflects very poorly on a candidate who is aspiring to be the Prime Minister of the country.

It is not the first such remark by Mr Modi. I quote from the New Indian Express verbatim:

“…He didn’t spare former chief minister Ajit Jogi either calling him an “apahij” (cripple)—“He is in wheelchair...,” implying a disabled leader cannot take his party to victory. He compared the Congress leadership with a Bollywood movie where a family introduced their beautiful daughter while finalising a marriage proposal but later switched sisters by bringing in the one with disability (Jogi) for the marriage ceremony…”

It is unbecoming of a person contesting to become the most coveted citizen of the country to express such insensitivity and callousness, even while lashing out at his rival. The language used to deride your rival cannot be tempered with phrases that are clearly derogatory in nature. In a sweeping remark the PM aspirant has deemed persons with disabilities as being unfit to hold the government post. He should, perhaps, read more about FD Roosvelt.

While strongly protesting against such unwanted remarks, the nation calls upon for an unqualified apology from Shri Modi for his insulting remarks.

Two years ago, Shri Sangma made similar derogatory remark that “India should have a President, who is not blind, dumb and deaf.” Neither Election Commission nor CCPD took any action on my complaint dated 9 & 10 July 2012. I request you all to respect the sentiments of disabled community and condemn these outrageous and insulting remarks by a PM candidate.

A disabled and proud citizen of India
Dr Satendra Singh 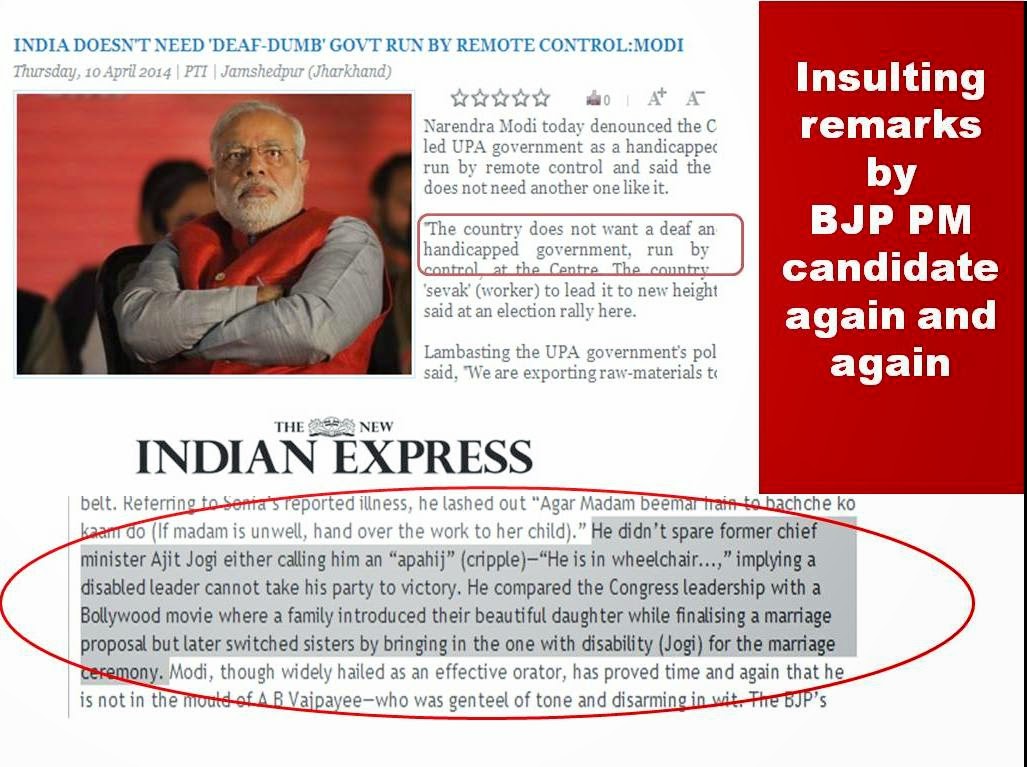 It has been reported that the BJP’s Prime Ministerial aspirant, speaking at an election rally said that "the country does not want a deaf and dumb, handicapped government”. The observations by Mr. Modi reflect a hackneyed mindset that is biased against persons with disabilities. Implicit in Modi’s statement is that persons with disabilities are “handicapped” and unable to discharge any responsibility let alone hold public office.

It has now become a habit for Modi to make such remarks. On an earlier occasion, he had called the former Chhattisgarh CM, Shri Ajit Jogi, a wheelchair user, a “cripple”.

Patronising terms like “specially-abled”, contained in the BJP’s manifesto, cannot hide the parochial mindset of the BJP, which promotes a model of development that works to the disadvantage of the marginalised.

It may be recalled that two years ago the BJP-backed candidate for the President’s office, Shri P.A. Sangma also expressed such insensitivity by stating that “India should have a President, who is not blind, dumb and deaf. India should have a thinking and a functional President.”

We would like to remind the BJP leadership that there are any number of persons with disabilities, the blind and the deaf included, who have made sterling contributions in public life.

Whatever the provocation, even at the height of a bitter political campaign, usage of such terms to deride political opponents is unpardonable. Such insensitivity and callous remarks made with the intent of deriding your opponents cannot be condoned and go unchallenged.

The NPRD lodges its unequivocal protest against these insensitive remarks made by the BJP leader and calls for an unqualified apology from him. It urges upon the Election Commission of India to take suitable action against him for these uncalled for remarks, which are not just an insult but question the intelligence and capabilities of persons with disabilities.

When netas use disability as abuse. Times of India. 20 Apr 2014
Posted by Dr Satendra Singh at 8:36 PM No comments:

Wheelchair bound Poonam, a blind woman with half her body paralysed, could not speak but happily flashed her inked finger to everyone at the Karaval Nagar polling booth under North-east Delhi constituency.This was not the first time she was casting her vote but Poonam, accompanied by her father, was equally excited about exercising her franchise.
Watching 60-year-old Ratan Singh enter the Burari poll on crutches, two volunteers rushed towards him with a wheelchair, but he moved forward to the polling room on his own. Differently abled voters, who had to face difficulties while exercising their franchise in the recently concluded Delhi Assemble elections held in December 2013, were a happy lot after witnessing improved and accessible polling booths across the capital.
The Delhi Election Commission had provided a wheelchair and two volunteers at each polling station to ensure better accessability to differently-abled voters."Unlike the Delhi Assembly elections, the arrangements in and around the polling stations were surprisingly good. I was offered a wheel chair by an assistant as soon as I arrived to cast my vote at Modern Public School in Barakhamba Road," said Ramesh Kumar.
RTI activist Dr Satendra Singh had raised the issue of inadequate facilities for disabled voters at polling stations. "I visited more than 40 polling stations to check if the promises made by the concerned officials have been fulfilled.I felt extremely happy to see the things changed this time as each polling booth had at least one wheelchair with an attendant," he said. Unperturbed by the unavailability of facilities, most disabled voters asserted that they should vote irrespective of difficulties. "Irrespective of the facilities at the polling booth, I would have to exercise my franchise, as I believe that each and every vote counts and will have an impact," 28-year-old Mohammad Javed, who was accompanied by his father, said.
A regular voter, Sonia Singh said, when wheelchairs were not available her brother and father would lift her up to help her vote at the poll booth. "I am voting for the fourth time and when wheelchairs were not available my brother or father used to lift me. I am happy there are such facilities now, but I would have come anyway." Purbi Devi, who had lost her legs in an accident, said if she was aware about NOTA option she would have used it.
"I came to vote because I believe its my responsibility. I would have exercised the NOTA option, but I would have come for sure. I never miss any election," the 42-year-old woman said.Delhi Election Commission had vowed to provide certain facilities to disabled voters including smooth transit to the polling booth.
Apart from facilities like braile ballots and ramps at the polling stations which were provided in the earlier elections as well, the DEC ensured availability of wheelchair and trained volunteers at every polling booth.A software enabling the people with special needs to seek customised arrangement for them on the polling day, was also launched by the election commission, ahead of the Lok Sabha polls.
Lok Sabha elections 2014
Posted by Dr Satendra Singh at 9:17 PM No comments: Posted by Dr Satendra Singh at 9:12 PM No comments:

Plea to use milimeter wave technology for dignified flying 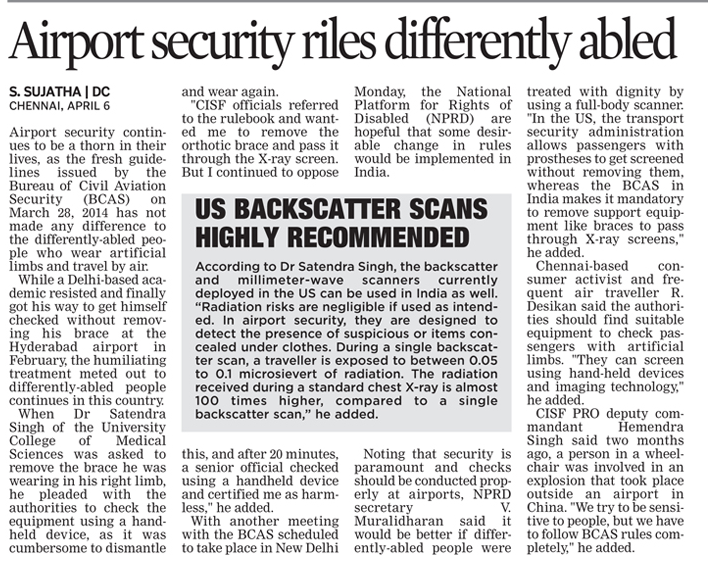 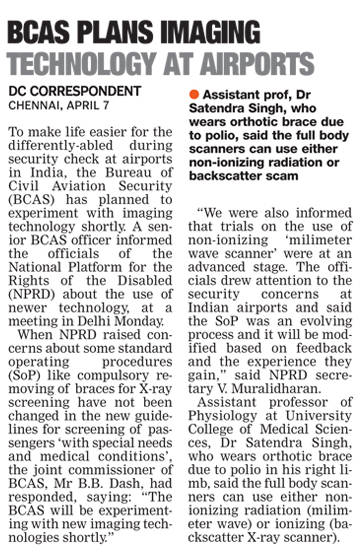 Posted by Dr Satendra Singh at 8:58 PM No comments: