Satendra Singh, a doctor at a University College of Medical Sciences (UCMS), is happy after winning a long fought battle. His efforts have resulted in installation of two automated teller machines (ATMs) inside Guru Teg Bahadur (GTB) Hospital.

The machine, accessible for person with disabilities, is an outcome of a firm persuasion by Dr Singh, who himself is a person with locomotor disability.

Recalling the efforts he made to achieve this goal, Dr Singh said that despite directions from the Reserve Bank of India (RBI) in 2009 and interference of Chief Commissioner for Persons with Disabilities (CCPD), who wrote to the Department of Banking Operations and Development in the year 2011, to make ATMs disable-friendly, not much action was taken and nothing came in concrete form.

He further said that the RBI master circular advises all the banks to provide ramps to their ATMs so that wheelchair users and persons with disability can easily enter the booths. The arrangements should be made in a particular height so that there would be no possibility of impediment for wheelchair users.


However, when Dr Singh filed an Right to Information (RTI) application to the RBI on behalf of the Enabling Unit (for persons with disability) at UCMS, it came to light that the RBI has no information on such ATM’s.

"It is the responsibility of the RBI to implement its circular. But it does not have any information on ATMs and their accessibility status," said Dr Singh. 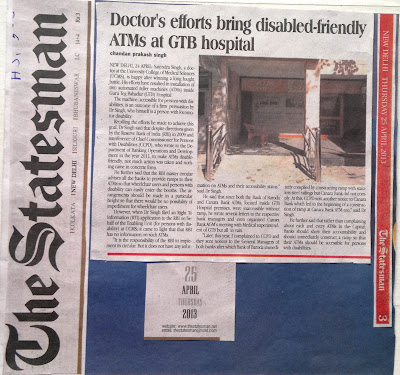 He said that since both the Bank of Baroda and Canara Bank ATMs, located inside GTB Hospital premises, were inaccessible without ramp he wrote several letters to the respective bank managers and even organized Canara Bank AGM’s meeting with Medical Superintendent of GTB but all in vain.

“Later, this year, I complained to CCPD and they sent notices to the General Managers of both banks after which Bank of Baroda immediately complied by constructing ramp with stainless steel railings but Canara Bank did not comply. At this, CCPD sent another notice to Canara Bank which led to the beginning of a construction of ramp at Canara Bank ATM too,” said Dr Singh.

He further said that rather than complaining about each and every ATMs in the Capital, Banks should show their accountability and should immediately construct a ramp so that ATMs should be accessible for persons with disabilities.

The AFID Conference aims to create a platform for South Asian countries to share and learn from each other and create a network of mutual support. Commonalities of culture, tradition and religious beliefs among these countries have made for better interaction and understanding of each other's experiences and difficulties. At the last conference on Jeju Island, Korea in August 2010, the Delhi-based organization, Samadhan, was selected as the host organization for AFID 2013.

The 21st AFID Conference will be held at the India Habitat Centre in New Delhi, India from 7-11 October, 2013. The theme of this conference will be "Towards Dignity & Quality of Life - Evolving Individual Capacity with Family & Community Participation”

To register please log onto http://www.afid2013.in/
Posted by Dr Satendra Singh at 11:38 AM No comments:

MCI asks all medical institutions to be ‘accessible’

MCI asks all medical institutions to be ‘accessible’

With not a single medical institution in India being completely accessible for persons with disabilities due to physical barriers in libraries, lecture halls and hospital campus, the Medical Council of India has now issued directions to the Deans/Principals of all the medical colleges/institutions in India to submit compliance report on access facilities for persons with disabilities directly to the office of the Chief Commissioner for Persons with Disabilities (CCPD).

The MCI issued the notice on a petition by Dr. Satendra Singh, Coordinator with the Enabling Unit of the Equal Opportunity Cell of the University College of Medical Sciences, here.

Dr. Singh had made a representation to CCPD to include ‘access audits’ in all inspections by the MCI and to derecognise all such hospitals that fail this test.

He had also submitted that while the MCI ensured reservation for persons with lower limbs extremities of 50 per cent to 70 per cent, for admission in all the medical courses, a number of medical institutions were completely inaccessible.

Dr. Singh, who himself suffers from “locomotor impairment” had remarked that “people with impairments are made disabled by the insensitive medical institutes and hospitals”. He had stated that while the MCI follows strict compliance in assessing building dimensions during inspections, but nowhere efforts are made to see whether the college is accessible to students with disabilities. He had noted that there was thus a need to make these buildings fully accessible to persons with disabilities.

The Chief Commissioner’s officer had subsequently issued a notice to the MCI in January this year to submit the action taken report. When nothing happened in the stipulated one month, another strong reminder was sent and the MCI was asked to respond before April 10.

The MCI then issued a directive to the Deans/Principals of all the medical colleges and institutions on March 29 to submit compliance report on access facilities for persons with disabilities directly to CCPD.
But Dr. Singh insists in doing so. “The MCI response is also shying away from responsibility.” He charged that “no mandatory directives were passed on including ‘access audits’ in inspections and no directive was passed in including medical persons with disabilities in such inspections which I specifically asked for.”

Apprehensive that the MCI was actually trying to skirt the whole issue, Dr. Singh said, “rather than replying to CCPD itself, the MCI has asked the institutions to respond directly to CCPD, Ministry of Social Justice and Empowerment.”

Dr. Singh said while he was only “asking institutions to use the Universal Design (the design of all products and environments to be usable by people of all ages and abilities, to the greatest extent possible),” still the matter was not being handled in the right manner by the authorities.

“A ramp will not only be used by a disabled but also by an 80 year old elderly, pregnant women, small children and trolley workers,” he pointed out, adding that “it is my dream to make all the health services in India barrier-free and this is a small effort in that direction.”


http://www.thehindu.com/todays-paper/tp-national/tp-newdelhi/mci-asks-all-medical-institutions-to-be-accessible/article4628862.ece
Posted by Dr Satendra Singh at 9:56 PM No comments:

It is estimated that there are more than 70 million people worldwide who require wheelchairs, yet only 5-15% of people have access. People in developing countries often depend on the donation of wheelchairs, which are frequently of poor quality and not suitable either for the users or their environment.Health and rehabilitation professionals are not always trained adequately to ensure people with disabilities have a quality wheelchair.

After extensive expert consultations, field trials and an expert review, WHO in partnership with the United States Agency for International Development (USAID), has developed the Wheelchair Service Training Package - Basic level. WHO is in process of developing the Wheelchair Service Training Package – Intermediate level which is expected to be launched in June 2013.

The main purpose of the training package is to develop the minimum skills and knowledge required by personnel involved in wheelchair service delivery. The complete package contains all the necessary forms and checklists and guides, a trainer's manual and a set of posters and presentations. It can be freely downloaded from WHO's website. The URL is given below:

Autism Spectrum Disorder (ASD) is a complex neurological and developmental disorder that affects how a person acts and interacts with others, communicates, and learns. ASD affects the structure and function of the brain and nervous system. Because it affects development, ASD is called a developmental disorder. ASD can last throughout a person's life. People with this disorder have problems with:
The symptoms of one person with autism can be very different from the symptoms of another person with autism. Health care providers think of autism as a spectrum disorder - a group of disorders with a range of similar features.

The United Nations General Assembly unanimously declared 2 April as World Autism Awareness Day. On the eve we present before you certain valuable information for mass awareness. 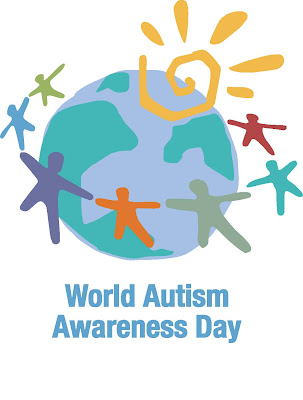 ASD includes:
·
One person with autism may have mild symptoms, while another may have more serious symptoms, but they both have ASD.
Despite the range of possible symptoms, there are certain actions and behaviors that are common in ASD and could signal that a child is on the autism spectrum. Parents and caregivers who notice these "red flags" should speak to their child's health care provider about autism and screening the child for ASD.
In general, the main signs and symptoms of ASD relate to: