Posted by Dr Satendra Singh at 7:21 AM No comments: 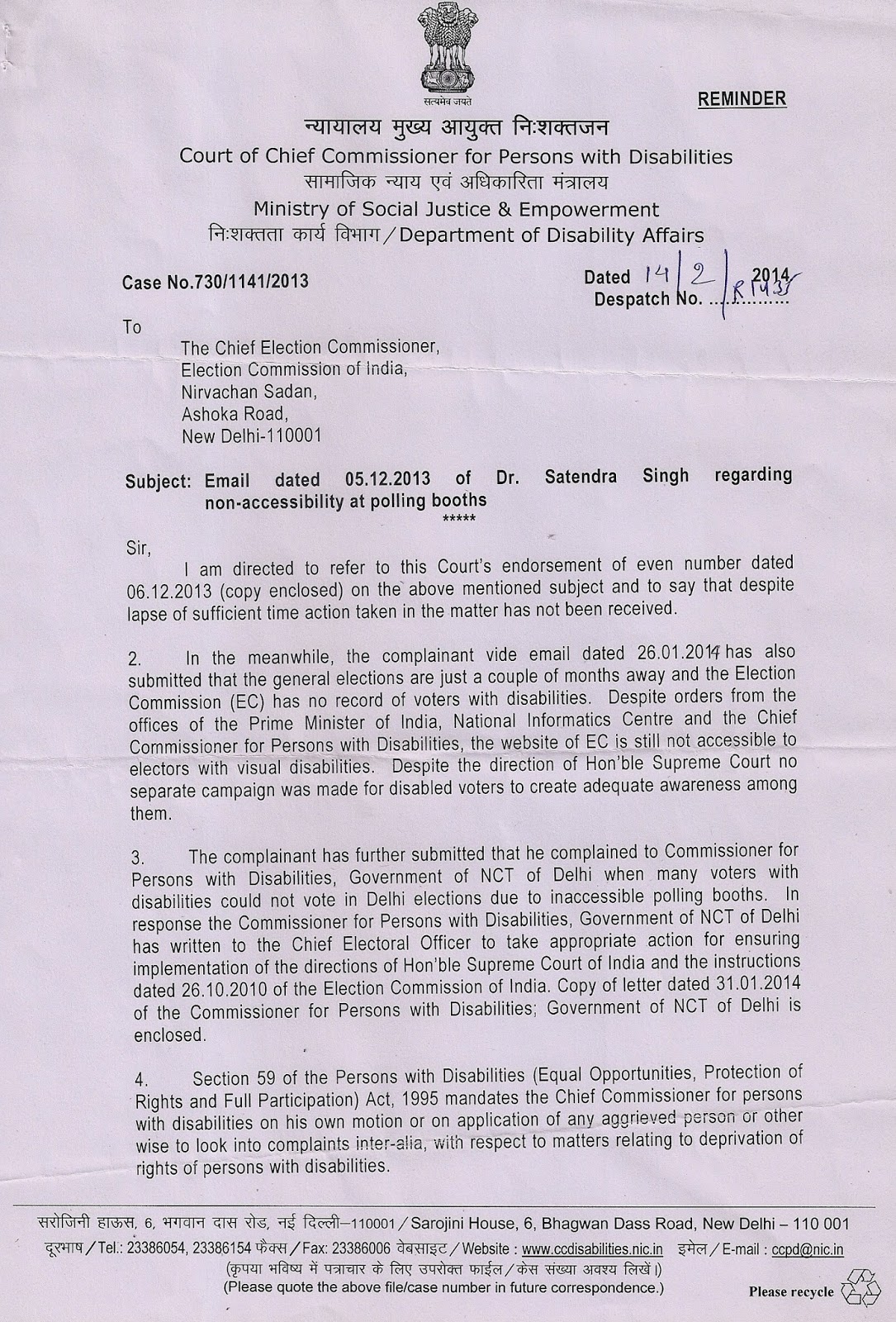 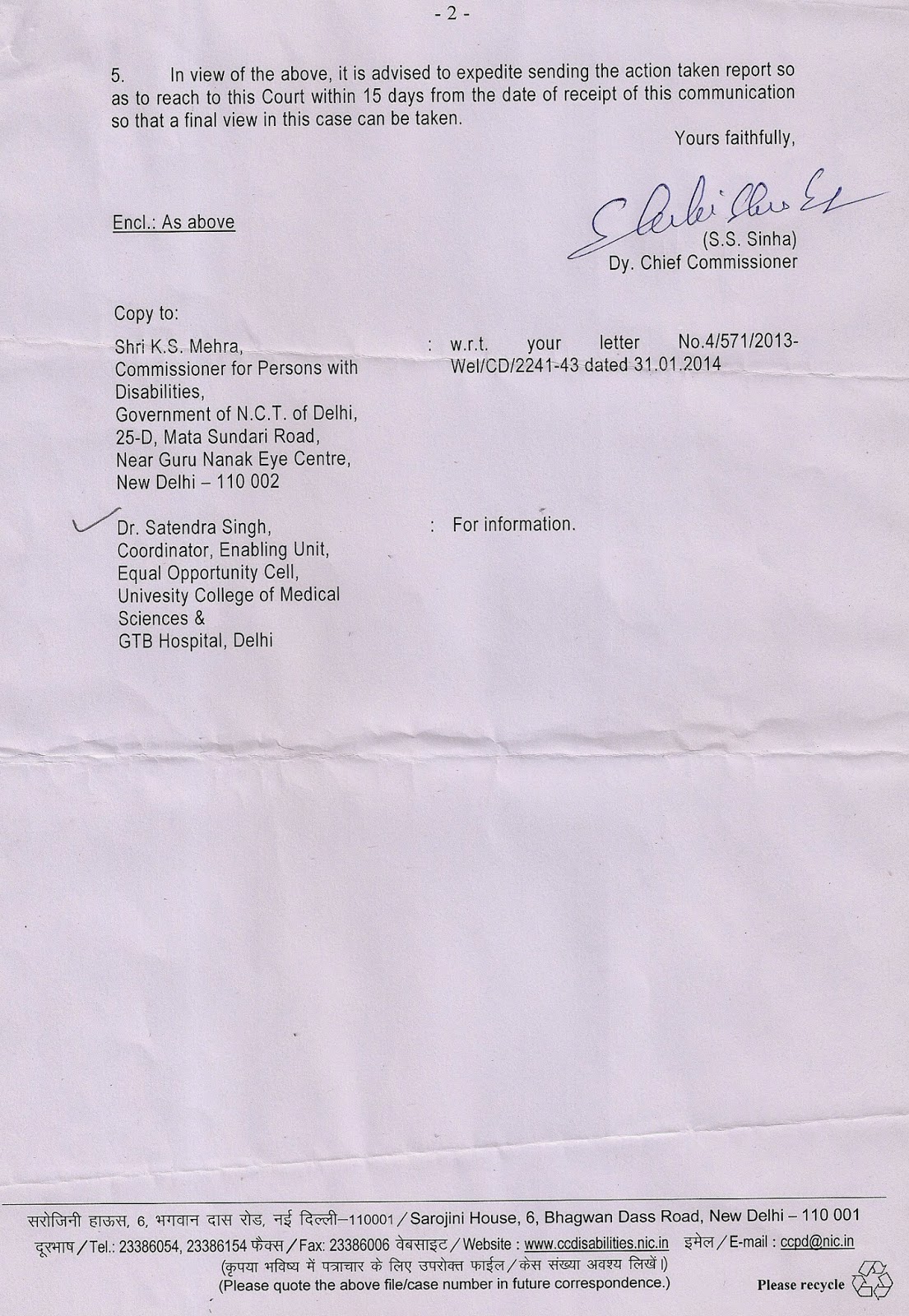 Posted by Dr Satendra Singh at 9:56 PM No comments:

Lok Sabha elections are not even a month away. My RTI expose of Election Commission of India's unpreparedness was highlighted on National Voters Day. I filed another one after Delhi Elections and the results are again shocking. The Times of India, The Statesman and now Deccan Herald covered the story in a last ditch effort to sensitize the people. 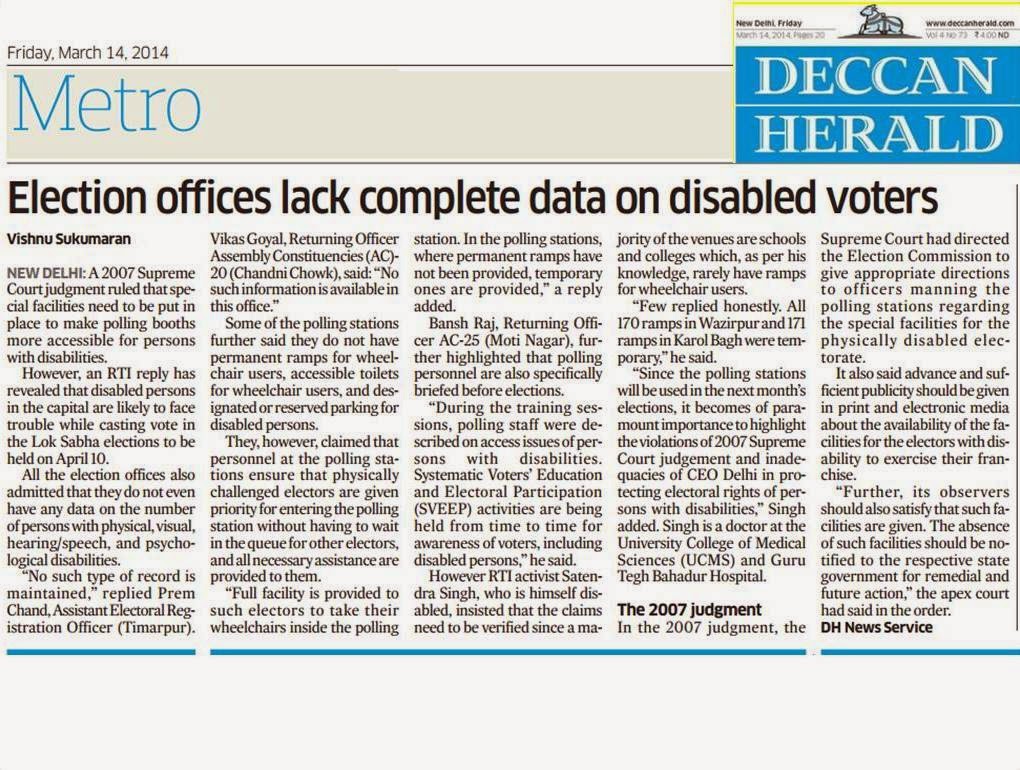 The complete Deccan Herald story can be read here.

Posted by Dr Satendra Singh at 7:28 PM No comments:

The issue of my ill treatment at Hyderabad was earlier covered in The Times of India, The Hindu, The Hans India. I filed an official complaint with Chief Commissioner for Persons with Disabilities and followed it up with letters to Director General (CISF), DGCA, and Ministry of Civil Aviation.

Director General, CISF immediately responded to my email and instructed his ADG, APS to look into the matter on March 10, 2014.

After a stringent campaign and awareness, DGCA also released its new CAR guidelines. Still the document is far from satisfactory and the fight goes on. 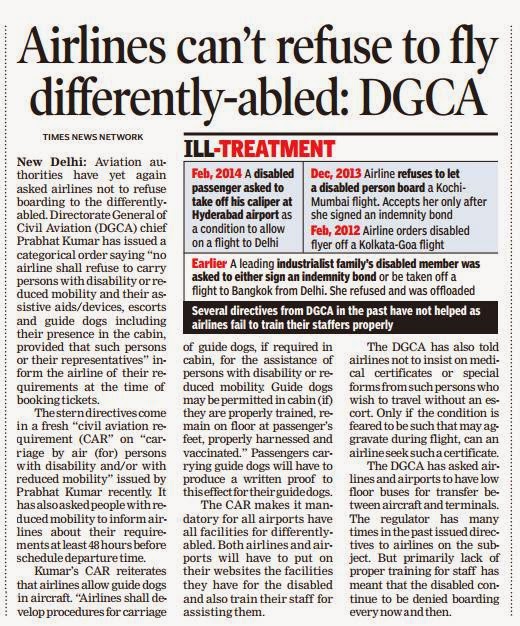 Posted by Dr Satendra Singh at 7:20 PM No comments:

Most polling booths not disabled-friendly (Statesman)

After Times of India, The Statesman covers a detailed coverage on my RTI exposing ill-preparedness of Delhi State Election Commission to safeguard rights of voters with disability. 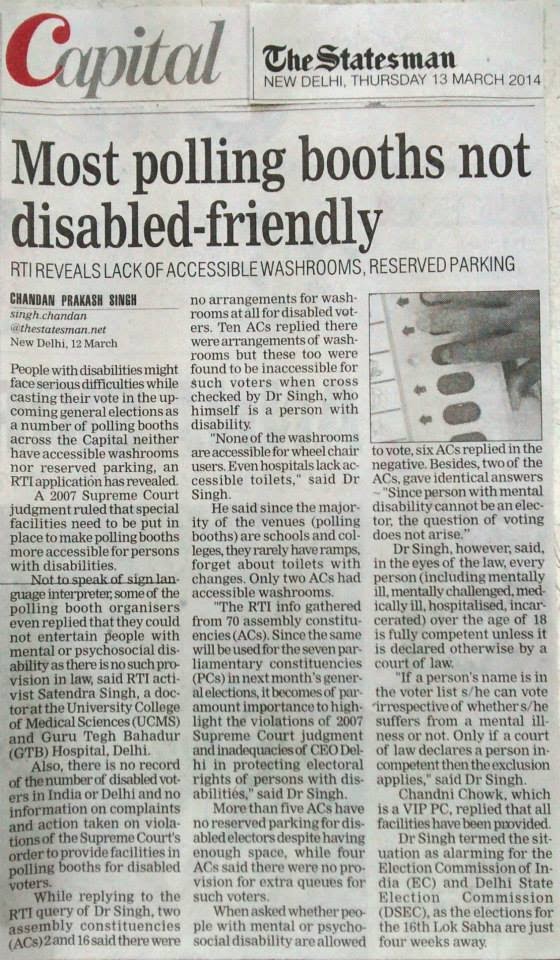 Posted by Dr Satendra Singh at 7:07 PM No comments:

"Since the same polling booths will be used in next month's election, it is of paramount importance to highlight the violations of the Supreme Court's 2007 judgement and failure of the chief electoral officer, Delhi, to protect the rights of those with disabilities," RTI activist Dr Satendra Singh, from University College of Medical Sciences, Delhi University, said.

A day after the Delhi assembly election, Singh wrote to the chief electoral officer of Delhi, marking copies to chief commissioner of disability and Delhi commissioner of disability, stating that many physically disabled voters were unable to exercise their franchise on December 4 because polling booths were inaccessible. Asked in an RTI query about details of complaints received pertaining to difficulties faced by electors with disabilities and action taken, the replies said no complaint or information was available. "What is the point of having email for grievance on website?" Singh said. 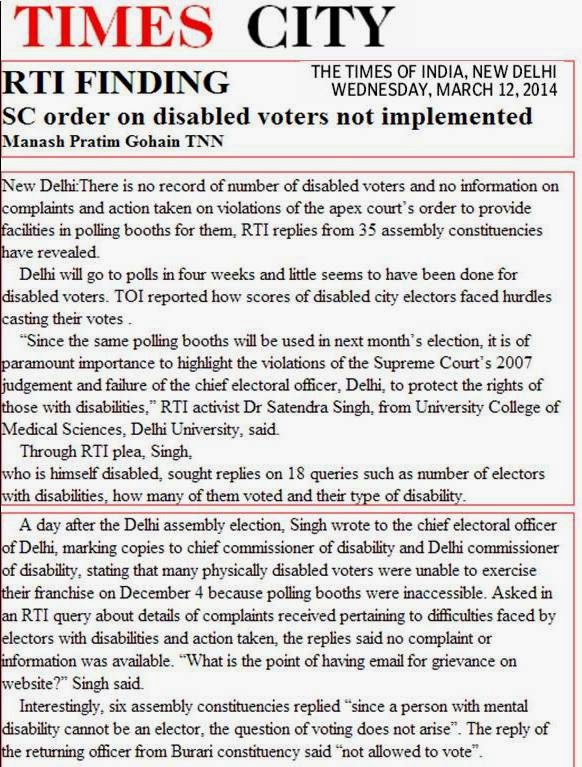 Posted by Dr Satendra Singh at 7:04 PM No comments:

Dr. Suman K Kasturi also covers the story of my harassment at Hyderabad. He writes in The Hans India:

"Singh, sardonically, was returning from a conference on "Evidence in Global Disability & Health" in Hyderabad. It was with the intervention of a higher official of Airport, Professor Singh was exempted. It was a pathetic condition experienced by a person who is in a noble profession.

The officials said that they were following the guidelines issued to them. There is no doubt that there should not be any compromise on security related issues. Nevertheless, some sort of exceptions like in Professor Singh’s case may be considered at least for future compliance."

The story was earlier covered prominently in Times of India and Hindu. 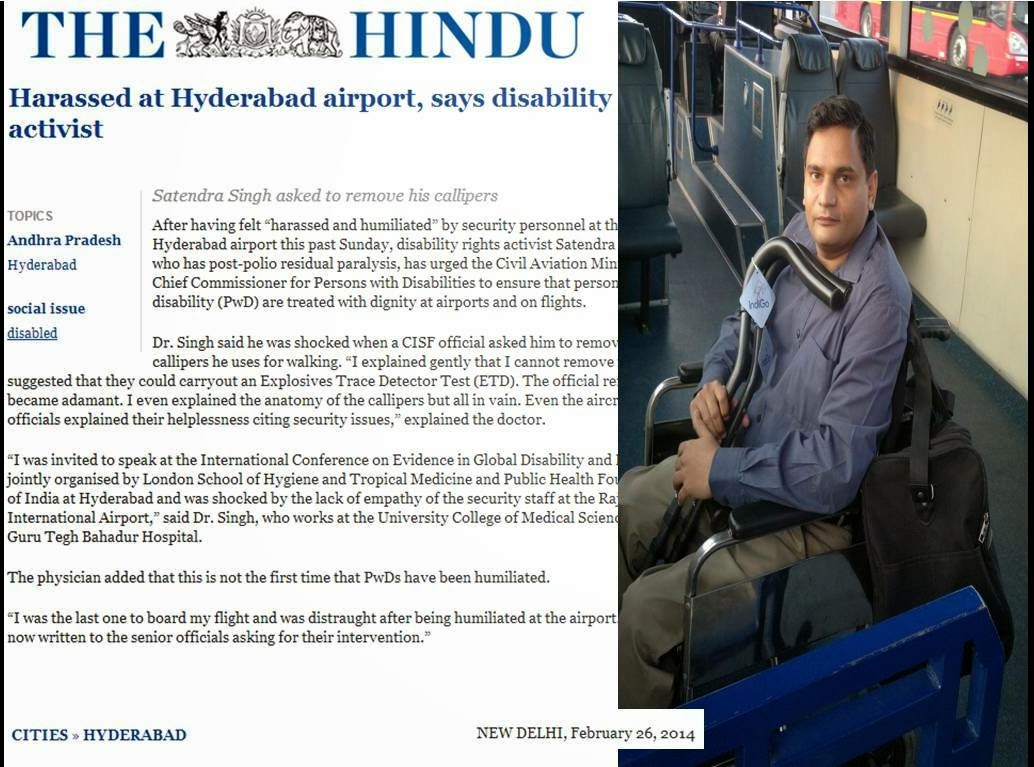 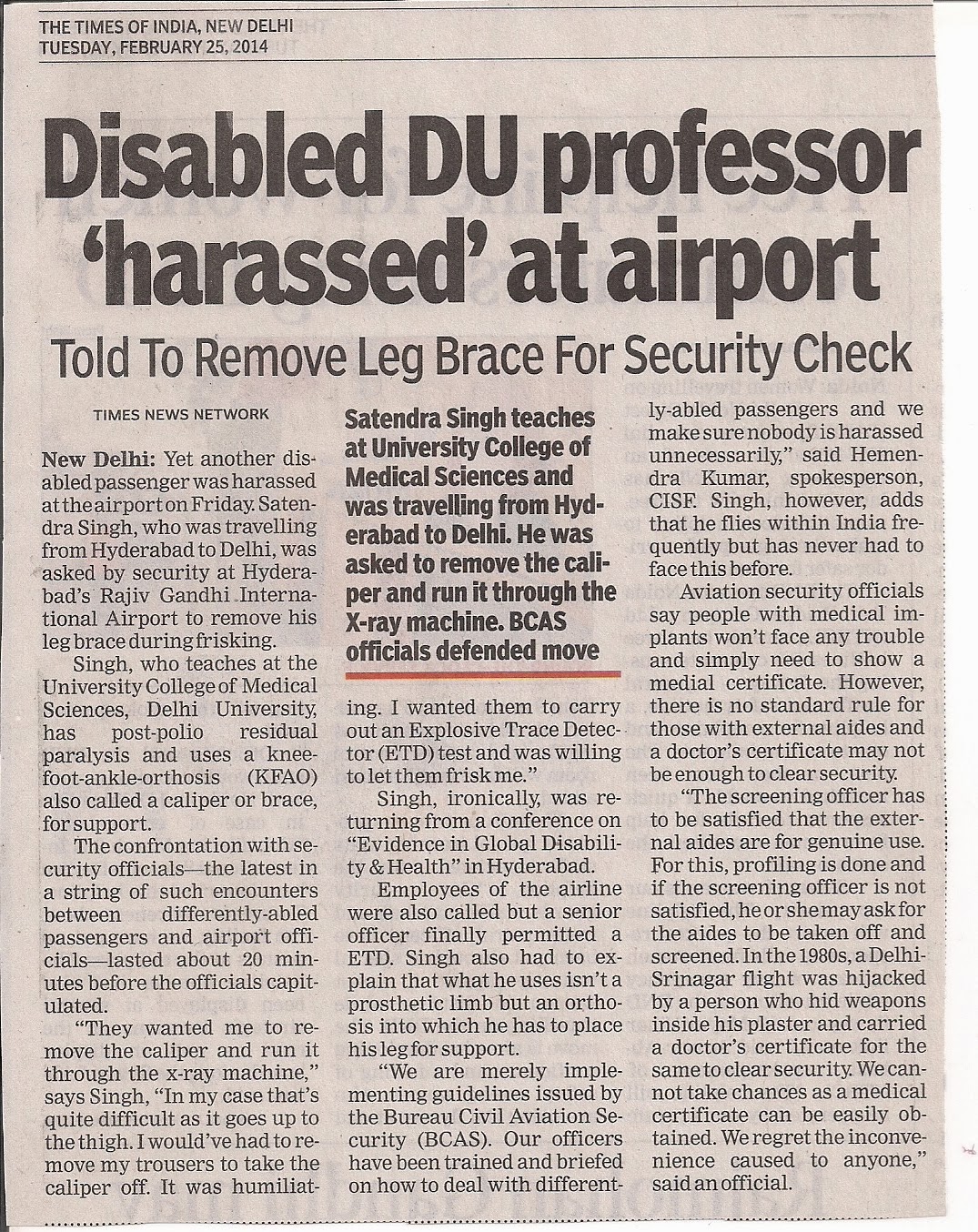