Shradha Chettri, Hindustan Times
New Delhi, Jan. 23 -- Organisations working for the welfare of the people with disabilities have written to Prime Minister Narendra Modi against the use of the word 'Divyang' because they find it insulting.

On December 3, at the launch of Accessible India - an effort to make public places accessible to all, the Prime Minister had suggested that 'divyang' should be used instead of 'viklang' to describe people with special abilities.

He made the same suggestion during his Mann Ki Baat radio address on December 27.

According to the groups for the disabled, Divyang means a person with supernatural powers in his body.

The letter to the PM was written by Abha Khetarpal, who was recently selected as one among 100 women achievers by Ministry of Women and Child Development. 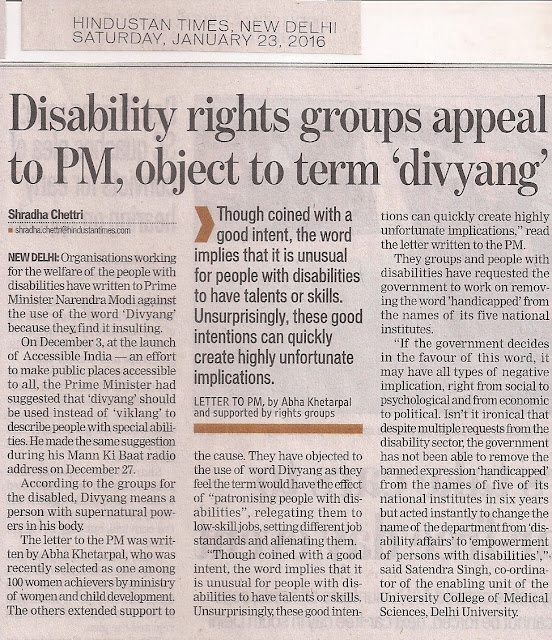 Posted by Dr Satendra Singh at 9:06 PM No comments:

Several organisations working for disability rights and people with disabilities themselves have categorically rejected the use of the word divyang coined by Prime Minister Narendra Modi to describe them, but he pressed on with using divyang at a function in Varanasi where he distributed aid equipment to several thousand disabled persons.

Disabled rights activists had written to the PM on January 17 appealing to him not to propagate "the insulting discriminatory , euphemistic and condescending word further", but judging by his repeated use of the term on Friday it has had little effect.


The PM justified using divyang saying: "What I want to do is change the mindset about differently-abled people. When I say let's use the word `divyang', it is about that change."

Several in the disability sector expressed shock and dismay that the PM insisted on using the word. "If the PM is commit ted to our welfare, as he said to day, why is he not taking our feedback on using divyang?

Why impose this word on us? It is not for other people to decide what to call us. It is to be done in consultation with us in keeping with the slogan `nothing about us without us'. We like the words disability and viklang and we do not think they are insulting," said Dr Satendra Singh, one of the signatories of the January 17 letter.


The repeated use of the word has also prodded the Na tional Platform for the Rights of the Disabled to issue an open letter to the PM saying that while they did not question the motive behind coining of the expression, mere change of terminology could not change the way the disabled were treated. "We presumed it to be a oneoff remark, emerging from some stray thoughts. But in the subsequent days we were bombarded with the use of the term `divyaang', not by you alone but various others in the government, who have taken the cue," the latest letter said.

"Exclusion and marginalisation can't be addressed by using patronising terms like `divyang'. On the contrary , they will only invoke sympathy and underline that charity is what counts," stated the letter ending with a request to the PM "to refrain from using the term and also shelve any plan that the government may be making to officially use this term".

What do the SDGs mean for India’s disabled citizens?

“I am pleased that elimination of poverty in all forms everywhere is at the top of our goals. Addressing the needs of 1.3 billion poor people in the world is not merely a question of their survival and dignity or our moral responsibility. It is a vital necessity for ensuring peaceful, sustainable and just world.”
- Prime Minister of India’s address at the United Nations Sustainable Development Summit1

According to the World report on disability, around 15% of the world's population, or an estimated one billion people, live with some form of disability.2This makes us,the people with disabilities, the world’s largest minority.This number is increasing with chronic diseases, population growth, and the ageing process. It is also reported that 80% of people with disabilities worldwide live in developing countries and 60-75% of these live in rural areas.3Thevicious circle between poverty and disability is known to everyone.

India was one of the first major countries to ratify the United Nations Convention on the Rights of Persons with Disabilities (UNCRPD) in 2007.4It thus becomes incumbent on India to harmonise all its relevant domestic laws and policies with this international treaty.UNCRPD also requires states to generate robust data in order to demonstrate their compliance with the obligations. Article 35 of the UNCRPD mandates nations to submit country reports on its effective implementation.
It took India 8 years to submit its first country report on UNCRPD implementation, which became public in November 2015 on the website of the United Nation’s Office of the High Commissioner for Human Rights.5The comprehensive report sadly lacks data to supplement the claims of the Government.

Disability data is essential to provide services, monitor the implementation, and equalise opportunities. How crucial it is can be gauged by looking at the census data. The latest 2011 census figures have shown only a marginal increase in the number of people with disabilities in India with the figure rising from 21.9 million (2.1% of population) in 2001 to 26.8 million (2.2% of population) in 10 years.6 This census data, however, has been widely criticised for being under-reported. Widespread criticism followed the use of direct question, ‘Is the person mentally/physically disabled’, in the census survey.5 In India, especially rural areas, disability is a big taboo and the use of such direct questions has possibly lead to under reporting.
Globally, the Washington Group of questions is used for authentic measurement of disability in surveys. The Telangana Disability Study Group7 of International Centre for Evidence in Disability, London, who used Washington Group questions, found the overall prevalence of disability in Telangana state of India to be 12.2%. This estimate is much higher than predicted in the Indian Census 2011, and justifies concerns of the disability sector. India does not feature in the list of countries/territories which have included Washington Group questions in their last census as per the website of UN Statistics Division and Secretariat for the Convention on the Rights of Persons with Disabilities.

As a health care professional with disability, and after being inspired by Prime Minister Narendra Modi’s inspiring speech at the UN General Assembly, I decided to search for evidence ofdisability data in our preparedness for post 2015 (now deliver 2030) agenda. I used the list of disability indicators – developed by the United Nations, International Disability Alliance and International Disability and Development Consortium8– and filed Right to Information (RTI) to gather data from our nodal Ministry on disability9 and National Statistical Agency.10 These indicators intend to measure the progress made for persons with disabilities in the implementation of the Sustainable Development Goals (SDGs).

Will SDGs serve the purpose?
To give an example, targets 4.a, 11.2 and 11.7 refer to accessibility by persons with disabilities and suggested ISO standards refer to building codes. At present, there are no common standards. The Draft National Building Code (NBC) of India is being revised after a decade but strangely the NBC exempted 14 places from having toilets for disabled.11 These public spaces include office buildings, cinemas, convention halls, theatres, art galleries, libraries, museums, hotels, restaurants, schools and educational institutions. Moreover, the Ministry of Urban Development has different guidelines. With the Accessible India Campaign being implemented by Centre on mission mode, the disability sector is in a dilemma as to which guidelines to follow.

SDG indicator 10.2 outlines the percentage of government websites which meet the ISO/IEC 40500:2012 of accessibility for Web content. Despite international guidelines being available, the majority of the websites of medical institutions and hospitals in the capital are disabled-unfriendly. For this basic health need, Ihad to file a petition in the Court of State Commissioner (Disabilities) of Government of Delhi to make all the websites of these hospitals accessible.12Following this, on the first day of the deliver2030 agenda, the websites of Delhi hospitals with accessible features were made live. We need this commitment in all the States/UT and certainly not through judicial activism. This is why these indicators must be included in the national framework.

The current scenario
There is no data as per the nodal Ministry on SDG indicators on disability9 despite India ratifying UNCRPD in 2007 and adopting the Incheon Strategy13 to “Make the Right Real” for Persons with Disabilities in Asia and the Pacific in 2012. The table shows disability indicators for SDGs and the response from Ministry of Social Justice and Empowerment. The last column also shows goals of Incheon strategy indicators adopted by India which overlap with SDGs to a large extent. The Strategy comprises 10 disability-inclusive developmental goals, 27 targets and 62 indicators, which build on UNCRPD.

There too was no clear response from the Ministry of Statistics &Programme Implementation on the same questions.9The RTI was forwarded to other ministries and departments like Vital Statistics Divison (Ministry of Home Affairs), Office of the Registrar General (Ministry of Home Affairs), Department of School Education and Literacy (Ministry of Human Resource Development), Ministry of Road Transport and Highways, and Ministry of Health and Family Welfare. The situation calls for deep reflection as we are in the Asian and Pacific Decade of Persons with Disabilities (2013-2022) as declared by the United Nations Economic and Social Commission for Asia and the Pacific.

The Government has launched the Accessible India Campaign (Sugamya Bharat Abhiyan), as a nation-wide flagship campaign for achieving universal accessibility for persons with disabilities. The targets 3A, 3B and 3C of the Incheon Strategy and the defined indicators (3.1, 3.2, 3.4, 3.6 and 3.8) for tracking the progress on these targets have been used to frame objectives and targets under this campaign.

The intersectoral approach used in this campaign is needed to address other disability statistics else the dream of a prosperous nation will remain elusive. Last month, we completed 20 years of enactment of Persons with Disabilities (Equal Opportunities, Protection of Rights and Full Participation) Act, 1995 and the lack of data itself speaks of the challenges ahead.With no disability statistics, how the Government frame policies for this largest minority of the world.
Father of the Nation Mahatama Gandhi once said, “A nation's greatness is measured by how it treats its weakest members."Unless and until people with disabilities are involved in this worthy goal of SDGs, the deal will not become real. Disability inclusion is the key towards human development.Yes, inclusion matters! 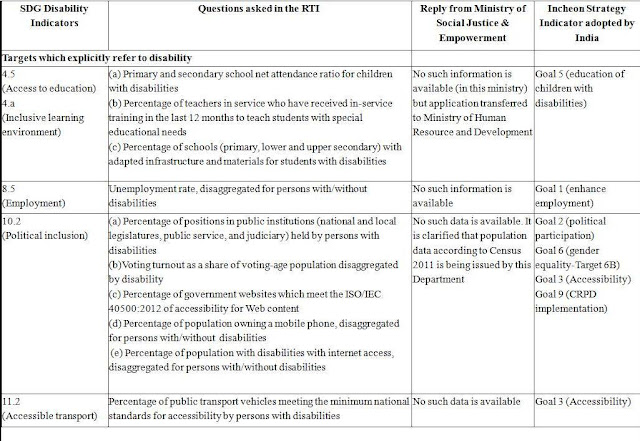 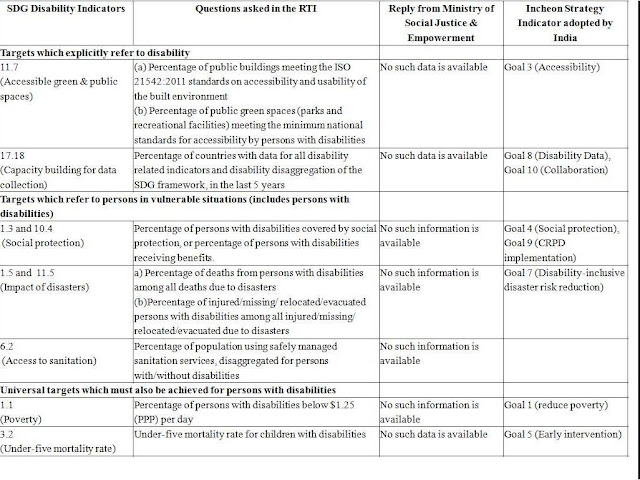 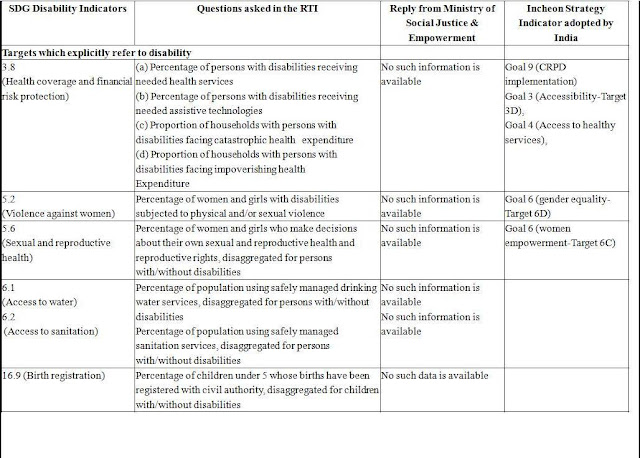 Posted by Dr Satendra Singh at 7:55 PM No comments: