This year’s recipients are as follows:

Voluntary and Professional Awards
1 individual with Down syndrome receives an award for outstanding self-advocacy:

Karen Gaffney (USA) – Long distance swimmer, motivational speaker and President of the Karen Gaffney Foundation. Karen advocates for the inclusion of people with disabilities in all walks of life, offering motivational workshops and inclusive programmes.

Professor Tony Holland (UK) – Chair of the Intellectual and Developmental Disabilities Research Group, University of Cambridge, whose pioneering work includes extensive research on the relationship between Down syndrome and Alzheimer’s disease.
Dr Zan Mustacchi (Brazil) – Medical and Paediatric Geneticist, Genetics Department at Darcy Vargas Children’s Public Hospital in Sao Paulo, and Founder Member of Brazilian Federation of Associations of Down Syndrome who he represents on the National Health Council.
Professor Marie-Odile Réthoré (France) – Medical Director of Institut Jérôme Lejeune who collaborated with Professor Lejeune and who has dedicated a lifetime to the medical care of people with Down syndrome and scientific research.

Posted by Dr Satendra Singh at 3:23 PM No comments:

World Down Syndrome Day (WDSD) is a global awareness day observed on 21 March each year. This date (21/3) represents the 3 copies of chromosome 21, which is unique to people with Down syndrome (DS), and people and organisations worldwide observe this day in a variety of different ways.

DS is a life-long genetic condition from conception caused by the presence of an extra chromosome in a baby's cells affecting approximately 1 in 800 live births, although there is considerable variation worldwide. DS usually causes varying degrees of intellectual and physical disability and associated medical issues. With around 7 million people with Down syndrome living worldwide, it is the most common and recognised form of learning disability. But most people with DS face a harsh reality of low life expectancy, physical and psychological abuse, stigma and segregation, and limited life opportunities as children and adults. People with DS living in poverty face these challenges but it is also true across the spectrum of wealth due to educational, political, medical and social barriers.

On 19 December 2011, the United Nations General Assembly declared 21 March as World Down Syndrome Day. The General Assembly decided, with effect from 2012, to observe WDSD on 21 March each year, and invites all Member States, relevant organizations of the United Nations system and other international organizations, as well as civil society, including non-governmental organizations and the private sector, to observe WDSD in an appropriate manner, in order to raise public awareness of DS.

Down Syndrome International (DSi) is a UK based international charity, comprising a membership of individuals and organisations from all over the world, committed to ensuring quality of life and human rights for all people with DS. DSi invites everyone across the world to wear LOTS OF SOCKS on 21 March 2013 to raise awareness on WDSD. Their website says, “We want to get people talking about WDSD on 21 March, and we can do this if we all wear socks…But not just any socks...brightly coloured socks, mismatched socks, long socks, printed socks, 1 sock…maybe even 3 socks (or EXTRA socks) for 3 chromosomes. Or if you don’t normally wear socks then wear them. Just so long as they are socks which are on display and people will ask you about.” 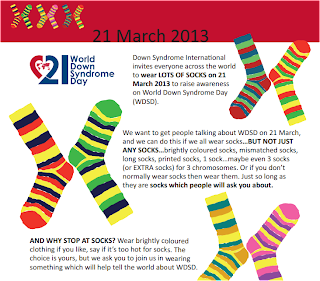 DSi will also organise World Down Syndrome Day Conference on 21 March 2013 at the United Nations Headquarters, New York, USA. This year's World Down Syndrome Day Conference is entitled: "Right To Work". Article 27 of the UN CRPD recognises the right of persons with disabilities to work, on an equal basis with others; this includes the right to the opportunity to gain a living by work freely chosen or accepted in a labour market and work environment that is open, inclusive and accessible to persons with disabilities.

There will be presentations from people with Down syndrome, disability organisations, employers, service providers and others from around the world including North America, South America, Europe, Asia, Africa and Australia. One can watch the live UN webcast at http://webtv.un.org/

What to say, what not to say? 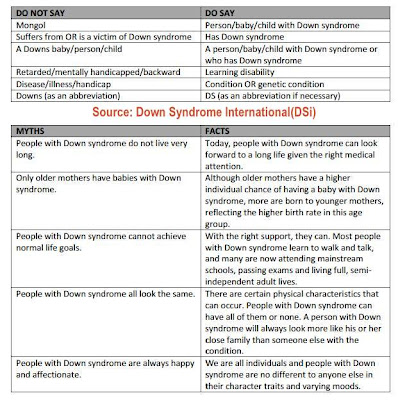 Indelible :A feature length documentary telling the inspiring stories of 7 people with Down syndrome in India, which is the official film of Down Syndrome Federation of India. This short version of the film was created specifically for the closing ceremony of WDSC 2012 in Cape Town, South Africa. Youtube link of the video is available at http://youtu.be/MMVfy6_nxp8


Posted by Dr Satendra Singh at 9:01 AM No comments:

Reposting Bruno Waterfield’s post “Euthanasia twins had ‘nothing to live for” published in The Telegraph on 14th Jan 2013.

The two deaf twins killed by legal euthanasia in Belgium were frightened of losing their independence in an institution and had "nothing to live for".
The two men, both aged 45, named as Marc and Eddy Verbessem, from the village of Putte, near the city of Mechelen, were both born deaf and asked for a mercy killing after finding that they would also soon go blind.

Dirk Verbessem, 46, explained that his younger brothers had lived together for all their adult lives and could not communicate with the outside world.

"Their great fear was that they would no longer be able to see each other. That was for my brothers unbearable," he said.

The deaf twin brothers had spent their entire lives together, sharing a flat while both working as cobblers and could only communicate with special sign language understood by each other and their immediate family.

"They lived together, did their own cooking and cleaning. You could eat off the floor. Blindness would have made them completely dependent. They did not want to be in an institution," said Mr Verbessem.

"I sometimes think, if they had their own wives and children, perhaps they would have had something to live for."

The brother and his parents, Mary and Remy, tried to stop the twins but were eventually persuaded by them that their lives should be ended under Belgium's euthanasia laws.

After enlisting the support of their local doctor, it took the twins almost two years to find a medical institution to administer a lethal injection after being turned down by their local hospital.

Four weeks ago, dressed in new shoes and suits, Marc and Eddy bid farewell to their parents and brother at Brussels University Hospital in Jette.

"I tried to talk them out of it even at the last moment," said their brother. "Together with my parents, I said goodbye. Marc and Eddy waved again at us. 'Up in the sky,' they said. 'Up in the sky,' we replied. And then it was over."

David Dufour, their local doctor, told The Daily Telegraph that as well as congenital deafness and approaching blindness caused by a genetically caused form of glaucoma, the twins had other severe medical problems.

"All that together made life unbearable. I have been very surprised but there is so much interest and debate about this," he said.

Dr Dufour said that the Verbessem family had overcome their opposition to the idea of euthanasia to help the twins make their case to doctors. "I have boundless respect for their parents and brother," he said. "Their family gave them the best, but hardest gift."

Under Belgian law euthanasia is allowed if a patient is able to make their wishes clear and a doctor judges that they are suffering unbearable pain.

The Verbessem case is unusual because neither of the men was terminally ill nor suffering physical pain.

Professor Wim Distelmans, the doctor that took the decision to euthanise the twins, defended his decision.

"It's the first time in the world that a 'double euthanasia' has been performed on brothers," he said. "There was certainly unbearable psychological suffering for them. Though there is of course it always possible to stretch the interpretation of that. One doctor will evaluate differently than the other."

Last month, Belgium's government announced plans to amend the law to allow the euthanasia of children and Alzheimer's sufferers. If passed, the new law will allow euthanasia to be "extended to minors if they are capable of discernment or affected by an incurable illness or suffering that we cannot alleviate".

Chris Gastmans, professor of medical ethics at the Catholic University of Leuven, expressed fear over the wider implications for the welfare of disabled people after the assisted suicide.

"In a society as wealthy as ours, we must find another, caring way to deal with human frailty," he said.

Posted by Dr Satendra Singh at 12:15 PM No comments:

International Conference on CerebraL Palsy and Developmental Medicine at Lucknow

R. P. Shah Memorial Trust for Children with Disabilities, Lucknow is organizing an International Conference on CerebraL Palsy and Developmental Medicine (ICCPDM) at Scientific Convention Center, Lucknow, India from 8-10 March, 2013. The preconference workshops will be on 6 and 7 March.

With 60 faculties and expected 2000 delegates and 30 faculties from USA and Europe, this will the largest conference on cerebral palsy and developmental disabilities all over Asia organised by the R.P.Shah Memorial Trust for Children with Disabilities and American Academy of Cerebral Palsy and Developmental Medicine The trust has 8 branches all over North India.