They capture the world in their mind’s eye

Shreya Roy Chowdhury TNN | Oct 8, 2012.
NEW DELHI: "Ek cycle bana rakhi hai," says Naresh, unimpressed. He studies the tactile image of a boy cycling by the sea in Mumbai, the description in Braille, then hears the audio description. That's the only way, Naresh, blinded at age two, can enjoy a photo exhibition. "I could take this photo too," he declares finally, adding after a pause, "If the road is clear." 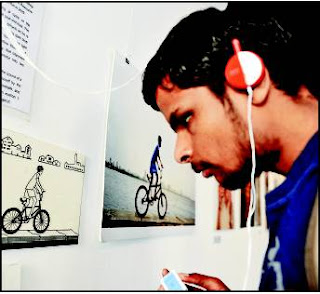 The third-year student was part of a batch of visually-impaired DU students to participate in a workshop meant to draw out "the images in their minds." The workshop was organized by ‘Infinite Ability’ (disability group at University College of Medical Sciences) and Beyond Sight Foundation.

Partho Bhowmick, founder of Mumbai-based Beyond Sight, can handle 15-20 participants at a time and typically works with a student for a year before they acquire the skills to photograph by following the sense they still retain. He trained about a dozen DU students at Friday's workshop; another batch on Saturday and NGO employees on Sunday.

He starts by handing out cameras to groups of two or three and left the students to get a feel of them — find the buttons, lens, screens. They also set out to get familiar with the location — Alliance Francaise in Lodhi Estate. An exhibition of 42 photographs taken by similar workshop participants over the past six years will be on display at AF till October 18. There is a manual of tactile images and multimedia audio-descriptions for about 20 of them to make the show disabled-friendly.

The photo Naresh had studied so closely was taken in 2009, by Ravi Thakur, born blind. He had heard the cycle coming, was confused by the crash of the waves, but was able to capture the image of the cycling boy all the same. Naresh had tried working his mobile phone camera once. "I tried taking my uncle's photo. Usme kaan hi kaan aye (I captured only an ear)," he says.

The students were asked to follow sounds, locate subjects through touch and hold a camera steady and straight. Satendra Singh of UCMS flit about helping students find their shutter-release buttons.

Those born blind follow sound and touch, the late-blind (those who lose vision later) use touch and sound, and that's supplemented by the memory of sighted life, and those with low-vision have "residual sight". The late-blind have "memories of a sighted life", as Bhowmick puts it, but the faces "erode first". "It's because in our sighted life, we see faces the most." Mahesh Umrannia heard the rustle of leaves, felt the warmth of the sun and called up from memory the pattern of leaves on trees. He photographs the reflections of leaves on a pavement. 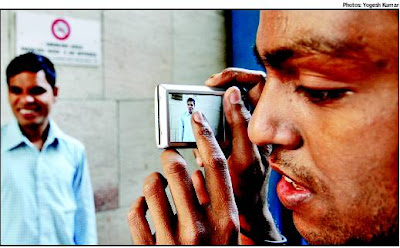 TOUCHING SHOW: An exhibition of photographs taken by visually impaired participants is on till October 18

The low-visioned have "residual sight" and photos produced by them are very close to pictures clicked by the sighted. Satvir Jagi, in 2009, clicked a photo of a spiral-staircase from bottom. When I showed him the print, he told me it looks like a cycle's wheel," says Bhowmick.

A photo clicked on digital cameras, in fact, makes visible elements of the photographed subject that those with low-vision can't see with the naked eye. Raju Singh, in 2006, had photographed a series of pillars and a man sitting at the base of one close to the photograper.

"People with low vision have depth-of-field issues. They can see things close to them. But digital cameras come with LCD screens and on the screen - as also in the photograph - every part of the part of the photograph is at the same distance from the eye," explains Bhowmick, "Raju Singh, therefore, could see in the photograph what he couldn't see in real life." Raju supposedly commented, "Photography helps me see." And Bhowmick used this to wrangle digital cameras from two companies for the workshops.

Till 2006, Bhowmick's engagement with the visually impaired was limited to helping them cross the road. He was another corporate man - his day job is in adhesives - but with an interest in photography.

Unlike many who enter the 'disability sector', he had no prior experience in dealing with the differently-abled. In 2004, he'd bought a book - a bargain at 10 bucks - containing an article on French blind photographer, Evgan Bavcer. With some difficulty, he got in touch with Bavcer and through him, a global consortium called Art Beyond Sight. Till 2005, he carried out "independent research on visual art and blindness." In 2006, he launched his project with one student, Sunil Bhavsar, who photographed the Victoria Memorial School for the Blind from the front. The work's titled, "My School."

Source: TOI
The Enablist’s view: While waiting for the students to come from DU, I got a phone call, “Is it Satendra Sir? I have reached France cultural centre. Where exactly is the venue?” It was Naresh, a visually impaired student from DAV College. He was the first person to come for the workshop. His colleagues were coming from the Equal Opportunity Cell’s special bus. As Shreya points out in the above piece, Naresh was the most enthusiastic. Partho gave him full time to answer his queries. 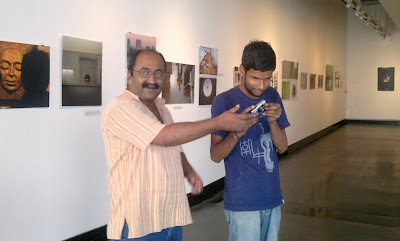 Soon the EOC bus arrived and we had visually impaired students from colleges like Dyal Singh, Mahrshi Valmiki, Lakshmi Bai, IP, Shivaji College and Ramjas College. Due to paucity of time we could not do sensory blind-folded workshops for the sighted but this experience was something beyond imagination. Thanks Partho! 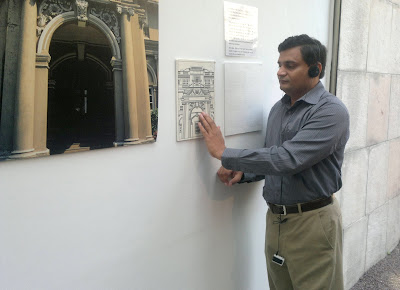 'Wide Eye Open' exhibition and 'Blind With Camera' workshop
Posted by Dr Satendra Singh at 7:57 AM